Diabetes is a group of metabolic diseases classified by chronic hyperglycemia resulting from defects in insulin secretion, insulin action or both. The prevalence of diabetes mellitus (DM) worldwide is drastically rising, with a predicted 366 million diagnosed in the year 2030 due to contributing factors such as obesity, inactivity, aging and hormonal disorders. While there are many available treatment regimens for T2DM, some of the older therapies present with undesirable adverse events, including hypoglycemia, hunger and weight gain. The latter is particularly problematic as insulin resistance is strongly correlated with obesity, having numerous metabolic complications such as T2DM, cardiovascular disease and dyslipidemia, all resulting in an increased risk of mortality 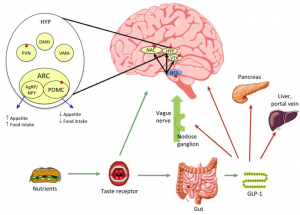 The advantages of GLP-1 drugs

Insulin therapy has a high risk of hypoglycemia, while GLP-1 is hypoglycemic in the form of glucose dependence, so the risk of hypoglycemia is extremely low. Most patients with type 2 diabetes are obese, and further weight gain associated with insulin injection can exacerbate metabolic disorders and diabetes-related complications (including microvascular and macrovascular complications). The weight loss effect of GLP-1 drug therapy is very beneficial to patients with diabetes. More importantly, its cardiovascular benefits provide excellent clinical compliance for long-term GLP-1 treatment.

The challenge of GLP-1 drugs

Compared with insulin, GLP-1 has unique biological function, and its hypoglycemic effect can be changed according to the change of blood glucose level. Therefore, even by oral administration, the lack of pharmacokinetics of GLP-1 is no longer a major challenge compared with insulin. However, since patients with type 2 diabetes often need to take multiple drugs at the same time, the main challenges facing oral GLP-1 drugs are feeding and the potential dangers of drug-drug interactions. The ultimate success of oral peptides or recombinant protein drugs requires a large number of clinical studies and verification by real-world patients after launch. In addition, due to the very low bioavailability of oral preparations, an injection dose of more than 10 to 100 times is usually required. Its production cost and price are also key to determining whether the drug can be used by American insurers and the European health care system.

As GLP-1 drugs enter the ADA-EASD guidelines as first-line drugs for type 2 diabetes, there will be a great market demand for GLP-1 drugs. Long-acting human GLP-1 drugs have insulin-similar hypoglycemic effects, not only extremely low risk of hypoglycemia, its weight loss and cardiovascular benefits, but also make long-term GLP-1 patients get greater benefits. Patients with type 2 diabetes need lifelong drug treatment. Doctors need to consider the patient’s own factors, which have an important impact on the treatment of the disease. These factors include patient self-care, the occurrence of complications, and the pressure to bear the cost of drug treatment over a long period of time.

In conclusion, the market needs diabetes drugs that are high-quality, low-cost, affordable, and have multiple effects to improve patients’ metabolic syndrome and quality of life. Long-term human GLP-1 drugs will be the main force in the diabetes market in the future.

source: GLP-1 drugs are expected to replace insulin as the best choice for first-line treatment of type 2 diabetes mellitus. – C…