Cricket! The game, not the insect. 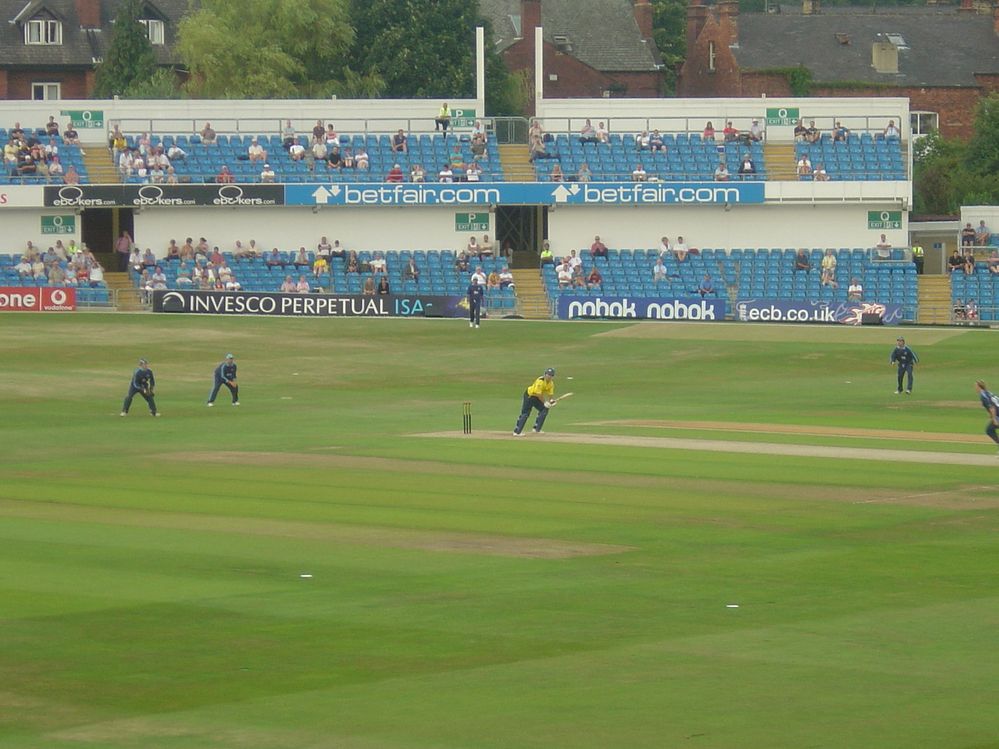 How to Bowl a Maiden Over by Roger Bartholomew

Roger Bartholomew grew up in the United Kingdom (UK), obtained his PhD from Imperial College (London), and played professional cricket in Leeds. He was a post-doc at the National Research Council of Canada (Ottawa) and then worked for Corning (USA), retiring after 36 years.

Bill Bryson wrote: “It is not true that the English invented cricket as a way of making all other
human endeavours look interesting and lively . . . but it is an odd game.”

Cricket is a game that originated around the middle of the seventeenth century and has evolved
over the years. The modern game is played on a pitch one chain (22 yards) long and
approximately 12 feet wide, on a field which is approximately oval, with axes ca. 500 and 450 ft. The perimeter is called the boundary. At each end of the pitch are three wooden stumps (or
wickets), 28 inches tall, each spaced about 4.5 inches apart, with two wooden bails on top. Four
feet in front of the stumps is an area called the crease where the batsman stands. The teams
consist of eleven a side, with a wicket keeper and a bowler, analogous to a pitcher and catcher
and nine other fielders. None of the fielders wear gloves, but the batters can have some hand
protection and an inning can last as long as there are two men still batting.

There are always 11 members of one team on the field and two batsmen from the other
team. The batsmen occupy the crease at each end of the pitch. The fielders have unique names
such as backward square leg, gully, third man and silly mid-off. The objective is to score more
runs than the opponent. When the bowler bowls, the receiving batsman does not have to hit the
ball and if he does, he does not need to run. One run is scored when he does run and both
batsmen successfully reach the opposite crease. If the ball is fielded and thrown to either end of
the pitch so it either hits the wicket or is caught and a fielder touches it to the wicket before the
batsman get there, he is out. If the ball crosses the boundary along the ground the batsman is
awarded 4 runs. However, if it clears the boundary on the fly that counts as 6 runs.

The ball is slightly bigger and heavier than a baseball. The bat is made of willow with a cane
handle spliced on the top. The surface of the bat is flat, about 4 inches wide, and the total length
is 38 inches. Two umpires officiate, one stationed behind the stumps at the bowler’s end, the
other about 20 feet to the side of the stumps at the batsman’s end. Bowlers must send a delivery
overhand with a straight arm, throwing or underarming a ball is illegal. A fast bowler can deliver a ball at 90 mph plus, comparable to a fastball in baseball. In cricket there are spin bowlers who
bowl at around 50 -60 mph and the ball bounces and breaks left or right. An over is when a
bowler sends down six deliveries. Another bowler then starts an over from the other end of the
pitch, bowling to the other batsman. An over in which no runs are scored is called a maiden over,
hence they bowl a maiden over! There are nine ways to get a batsman out.

When I grew up in the UK, I had a promising cricket career, playing for Leeds, a team equivalent to a baseball AA team. We played on the famous Headingly ground (see above), the Yankee Stadium of cricket. The decision whether to become a professional player or attend college for chemistry was a no brainer. The pay in the 1950s for a professional cricketer was not great, so chemistry won out. Other teams I have played for include the Imperial College, London University team, and while in Canada doing a postdoc., the Ottawa Cricket Club. I was a batsman who occasionally bowled.

The sport of cricket has its roots in England and is still a major sport in countries of the former British empire (England, Australia, India, New Zealand, West Indies, Pakistan, Sri Lanka, and South Africa). It has recently become a game enjoyed by men and women, up to the international level. The major international competitions involve Test Matches, typically a series of five matches, each lasting five days. The most famous of the international competitions is between England and Australia when they compete for The Ashes. The origin of this term has been disputed but it is generally agreed that it came from a satirical article in the 1850s when Australia defeated England and the writer described the ashes of English cricket being buried in Australia.

These five-day matches are played in all first-class cricket, but to increase interest in the 1950s in India, shorter matches were arranged that lasted for a single day and were limited to a specific number of overs.  This began in England in the 1960s and became very popular such that now in addition to the standard test matches, there are international series of limited-over cricket, 20 or 50 overs being the most popular. Both formats continue today in regional competitions throughout the world.

Most cricket elevens consist of five specialist batsmen (one of whom is the wicket keeper), four specialist bowlers and two who bat and bowl, called allrounders. There are nine ways for a batter to be out, some like baseball: caught, run out (caught stealing), bowled when the ball hits the stumps (strike out), impeding the fielder, to name a few. The names given to the fielders in cricket are strange and wonderful. The close fielders similar to infielder have names such as slip(s), square leg, gully, cover, point and silly point, among others. The outfield positions close to the boundary have names such as third man, fine leg, long on and deep mid-wicket.

The internet is full of great information such as espncricinfo.com or on You-Tube. My local cable TV station has a cricket channel called “Willow” which shows games from all round the world. Watch some—you might enjoy it!