Levoglucosenone (LGO) has an advantage over other biomass platform chemicals because it can be directly produced by pyrolysis of cellulose. Our partners, Circa Group, have developed a production method that employs catalytic aerobic fast pyrolysis (CFP) to produce levoglucosenone in bulk quantities from waste cellulose.

The resulting enantiopure bicyclic α,β-unsaturated ketone, levoglucosenone, is recognized as a very valuable platform molecule due to the preservation of one of the natural chiral centers of cellulose. In addition, the α,β-unsaturated ketone and masked aldehyde functionalities in levoglucosenone open the way to a wide range of synthetic strategies. Furthermore, levoglucosenone can be transformed to other useful compounds like (S)-γ-hydroxymethyl-α,β-butenolide (HBO) via Baeyer–Villiger oxidation, the respective saturated derivative (S)-γ-hydroxymethyl-α,β-butyrolactone (2H-HBO) and iso-LGO. 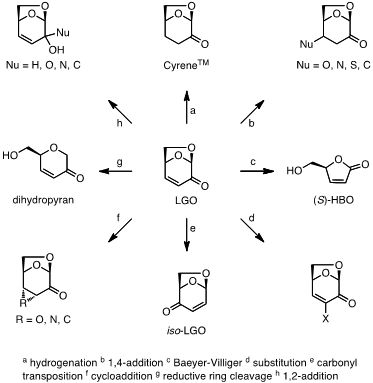 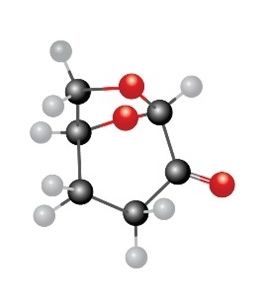 CyreneThe most widely employed levoglucosenone derivative to date is hydrogenation product, dihydrolevoglucosenone (Cyrene).1 This has been used as a greener alternative to DMF and NMP in a range of applications including graphene production,2 membrane synthesis3 and cross-coupling reactions4. Kewen et al from the University of Manchester produced graphene inks in high concentrations and conductivity employing Cyrene as solvent5. They reported the use of the greener solvent significantly speeds up and reduces the cost of the liquid-phase exfoliation of graphite.

Asymmetric synthesis is a central discipline within modern organic chemistry. The 1,6-anhydro bridge of levoglucosenone locks the pyranose ring in the 1C4 conformation and sterically hinders the β-face of the molecule providing an excellent facial selectivity.

Greatrex et al employed (−)-levoglucosenone as a biorenewable chiral synthon to form enantiopure cyclopropyl esters using the base-promoted carbocyclisation of 4, 5-epoxyvalerates.6 This protocol was applied to the enantiospecific synthesis of the GABAc receptor agonist (1S, 2S)-trans-2-aminomethylcyclopropanecarboxylic acid ((−)-TAMP) and its enantiomer. The process was also extended to generate 1, 1, 2-and 1, 2, 3-trisubstituted cyclopropanes resulting in a formal synthesis of the selective glutamate receptor antagonist PCCG-4. 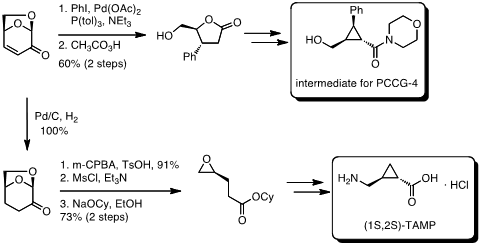 Bonneau et al reported that levoglucosenone and Cyrene could be readily oxidized into HBO and 2H-HBO respectively, solely in the presence of aqueous hydrogen peroxide.7 The robust and scalable synthetic procedure gave access to these highly valuable chiral building blocks while avoiding the use of an organic solvent, acid and catalyst hence minimizing waste. Moreover, short-path distillation provided an industrially applicable separation and purification technique. This work paves the way for the large-scale, sustainable production of HBO and 2H-HBO.

The existing, low-yielding, and non-sustainable Et3N-mediated homocoupling of levoglucosenone (LGO) into the corresponding LGO-Cyrene diketone has been developed by Diot-Neant et al to make a greener process. 8 Methanol was employed as both a renewable solvent and catalyst and K2CO3 as a safe inorganic base to provide the desired product with improved yield, purification, and sustainability profile. LGO-Cyrene was then subjected to a one-pot, H2O2-mediated Baeyer–Villiger oxidation/rearrangement followed by acidic hydrolysis to produce a new sterically hindered bicyclic monomer, 2H-HBO-HBO. This diol was further polymerized in bulk with diacyl chlorides to access new promising renewable polyesters that exhibit glass transition temperatures (Tg) from −1 to 81 °C and a good thermostability.

The introduction of levoglucosenone at scale supports the sustainable production of a variety of industrially relevant chemicals. Camp and Greatrex have recently written a review with further details of drug discovery applications.9  Levoglucosenone is available through Merck KGaA, Darmstadt, Germany (MilliporeSigma).