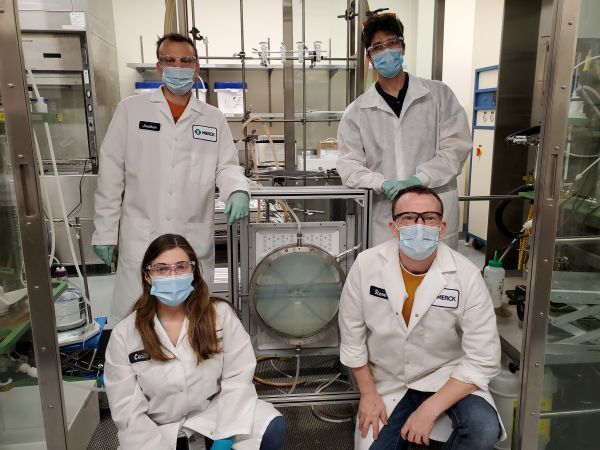 Belzutifan is an important new drug used in the treatment of cancer and other non-oncology diseases. Acquired by Merck in 2019 through the purchase of Peloton Therapeutics, a new, greener manufacturing process for its synthesis was needed. Over the next 18 months, the team developed a more direct route from commodity chemical to API, employed new reaction conditions, particularly in the oxidation sequence, and incorporated new technology, photo-flow.

Despite this accelerated timeline, the team achieved a five-fold improvement in overall yield with a commensurate 73% reduction in process mass intensity (PMI) compared to the original route. Notably, the Merck team also developed a visible light-initiated radical bromination performed in flow. According to the L.-C. Campeau, Executive Director and Head of Process Chemistry and Discovery Process Chemistry at Merck, this is the “first example of a photo-flow reaction run on manufacturing scale at Merck and represents the linchpin of the synthesis.”

The improved process for Belzutifan, which is expected to launch this year, will reduce the waste associated with its manufacture and is aligned with Merck’s corporate sustainability goals.

“The Merck team delivered an excellent example of the application of innovative technologies to develop a more sustainable synthesis of the pharmaceutically-active compound, Belzutifan,” comments Paul Richardson, Director of Oncology and Chemical Synthesis at Pfizer and Co-Chair of the ACS GCI Pharmaceutical Roundtable. “Using the guiding principles of green chemistry, for example, in the use of catalysis and a relatively benign reaction media, further illustrate the Merck team’s work as worthy of recognition for the 2021 Peter Dunn Award.”

The award will be presented at the June 11 GC&E Friday, part of the 25th Annual Green Chemistry & Engineering Conference. During this session from 10 a.m. – 1 p.m., Stephen Dalby & Jon MacMullen will be discussing the details of this innovative process.