Electricity has existed naturally since the beginning of time. Over centuries, humans have devised ways to capture electricity and eventually create it.

Once being able to generate electricity, there has been no shortage of ingenious ways to use it – lighting, kitchen appliances, communications and electronics of all kinds, automobiles – to name a few.

The first 19th-century use for electricity was the incandescent light bulb, devised by the great and prodigious inventor, Thomas Alva Edison.  He obtained a U.S Patent for his light bulb in 1880. His light bulbs, attached to small generators, started to illuminate the homes of the very wealthy and heralded the ultimate demise of gas-fueled lighting.

Since this beginning, electricity has become the predominant energy used by people globally. Generating electricity requires vast amounts of fuel. At present, 63% of that fuel is largely fossil fuels (coal, petroleum and natural gas) that are converted into electricity. The conversion process is not very efficient. According to the Energy Information Administration (EIA), more than 60% of the primary energy used to create electricity is lost in conversion.

As demand for electricity is certain to continue to increase, it is worth noting that the World Bank estimates that 940 million people have no access to electricity, primarily located in Sub-Saharan Africa. This NASA composite nighttime map below graphically illustrates the previous point.

If we are to attain UN Sustainable Development Goal 7 – Ensure Access to Affordable, Reliable, Sustainable and Modern Energy for All – the science of chemistry will play a major role in solving the challenge of how to reach the 940 million without electricity, provide same to an ever-increasing world population and reduce the greenhouse gas emissions negatively impacting our global climate.

The increased use of renewables as a source of electricity production is a good sign, and for the balance of this article, we will focus on the most powerful and plentiful renewable – our Sun.  Amazingly, according to the U.S. Department of Energy, the amount of sunlight that strikes the earth's surface in an hour and a half is enough to handle the entire world's energy consumption for a full year.

Harnessing the Sun’s power would provide all Earth’s inhabitants with a clean, renewable and sustainable energy source for billions of years.  The challenge has been in capturing and converting sunlight into electricity in an effective, efficient and reliable manner.

Essentially, there are two primary means of harnessing sunlight – photovoltaic (PV) solar cells arrayed into panels (think for home and business uses) and very large concentrating solar-thermal power (CSP) systems that use mirrors to reflect and concentrate sunlight onto receivers that use heat to generate electricity. The world’s largest CSP facility in the world is the Quarzazate Solar Power Station (also called Noor). Setting aside the large CSP plants, most people will experience solar power through PV cells.

At present, most PV cells convert only 15-20% of sunlight into electricity in the form of direct current (DC). That DC electricity must then be converted into alternating current (AC) which is the common global standard for powering our homes and businesses.  (For more on how they work, please visit  Solar Explained, the U.S. Energy Information Administration).

Solar panels are most commonly made of a thin layer of silicon and are exactingly manufactured under high heat. While the manufacturing costs of silicon solar cells have decreased over the last several decades, the key question is how to efficiently and cost-effectively convert that sunlight into electricity to make it a reliable and sustainable fuel source.

Towards that end, chemists and materials scientists have been working to develop improved, more efficient solar cells based on a number of technologies such as thin-film cadmium telluride and copper indium gallium diselenide (CIGS) and emerging technologies such as perovskite and organic cells.

The National Renewable Energy Laboratory (NREL) maintains a chart of the highest confirmed conversion efficiencies for research cells for a range of photovoltaic technologies. Right now, some technologies are showing promise of near 50% conversion to electricity.

The U.S. Department of Energy’s Solar Energy Technologies Office released a report in September 2021 – Solar Futures Study – that predicted that “with aggressive cost reductions, supportive policies, and large-scale electrification, solar could account for as much as 40% of the nation’s electricity supply by 2035 and 45% by 2050.”

With increased efficiency and decreasing costs to manufacture solar panels, their use globally will undoubtedly climb as a green and renewable source of electricity generation and help combat climate change. Advancing the recyclability of PVs will be the needed next step in making a truly sustainable technology.

These breakthroughs will help deliver on UN SDG Goal 7 in Sub-Saharan Africa.  The continent of Africa receives more sunshine than any other continent on Earth. While Sub-Sahara Africa lacks electrical infrastructure, solar cells can be constructed into independent, off-grid systems to bring power and light to areas presently without. 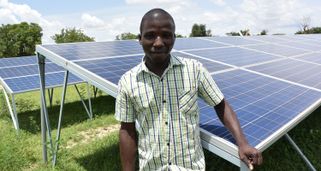 Through innovation, scientists are proving that indeed there is something new under the Sun! And that is good for the Earth and its people!